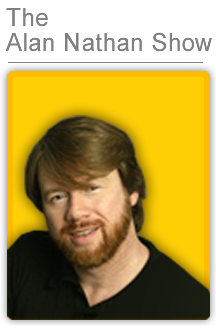 Tired of the usual liberal/conservative treatment that strangles most media debates? Fed up with positions ignored unless they meet their pigeon-holed agenda? Then tune in to Alan Nathan, the centrist with teeth, as he advances a more biting aggressiveness to both sides of the political spectrum. Named three times by Talkers Magazine as one of the top 100 talk hosts in the country, Alan Nathan has gone toe-to-toe with national leaders, columnists and extremists from all corridors of public argument. Also known as the “militant moderate,” Alan Nathan is an Achievement in Radio award nominated host and former national television correspondent.

Every program begins with his mantra, “We want the Republicans out of our bedrooms, the Democrats out of our wallets, and both out of our First and Second Amendment rights.” (He additionally challenges the Libertarians.) He’s been called the “centrist with teeth,” who conducts a guest-generated, panel-driven, dialogue and debate show that moves at about 125mph. Alan insists that regardless of the issue, (political, social or cultural) one can be both substantive and spirited.

As an eyewitness on 9-11, Alan was the first member of the media to report the attack on the Pentagon. Compelling and irreverent, Alan has often been a guest panelist on a myriad of television outlets including CNN and The Fox News Channel. He lectures at live events (Harvard, American University, George Mason University, etc.) and has had numerous published writings carried by such outlets as The Washington Times, The Washington Examiner, World Net Daily, Insight Magazine and Front Page Magazine. Excerpts from his columns have been quoted on the floor of the House of Representatives and were additionally cited in The New York Times and The International Herald Tribune. Now in his 23rd year of national syndication, the conversation continues . . .

What People Are Saying About The Alan Nathan Show…

“One of the most unusual talk shows in the business because he is a radical moderate. It terrified me the first time I was on because within 30 seconds I realized I was playing in a very difficult sport. It’s a brilliant show and he is a brilliant moderator.” — MICHAEL HARRISON, Editor & Publisher, Talkers Magazine

“I had a phenomenal time, just about the best interview I’ve had in quite a while- you have an incredible command of the language” — LEE GREENWOOD, Country Music Recording Artist and Entertainer

“I think he’s got a winner and I thoroughly enjoyed being on.” — DAVID GERGEN, U.S. News & World Report

“Great back and forth. Tough but fair. Happy to be on anytime.” — ELEANOR CLIFT, Newsweek Magazine and NBC’s McLaughlin Group Panelist

“Alan is quick-witted, full of razor sharp comebacks. He’s a fierce centrist who gets both sides of the political spectrum equally fired up.” — RITA COSBY, 3-Time Emmy Award winning Reporter formerly with both MSNBC and FOX News Channel

“I have had the pleasure of being interviewed on “Battle Line with Alan Nathan” and found Alan to be delightfully charismatic, fair and sensible in his commentary. Alan does not shy away from difficult issues. — AMBASSADOR AKBAR S. AHMED, Ibn Khaldun Chair of Islamic Studies, American University

“Your reputation is formidable… I’ve been listening to you – you’re terrific!” — ELAINE CHAO, former Secretary of U.S. Department of Labor

“You are without exception the most talented talk host in the business. The caliber and speed of your show is without equal.” LT. COL. BILL COWAN, Fox News Counter-terrorism Expert and Highly Profiled Commentator.